Census data can be confusing.  Give yourself plenty of time to become familiar with the tools.  When most people hear the word "census," they think of the Census of Population that is required by the U.S. Constitution. The Census collects current and historic population data collected by the Census, in addition to other censuses, like the Census of Agriculture and the Economic Census.

2010 Census A website specifically about the 2010 Census, how it was collected, the data that will be available, and what will be done with the data.

State and County QuickFacts  Easy access to facts about people, business, and geography, based on U.S. Census data:

Epodunk: The Power of Place  Obtain information from the U.S.  Census Bureau about a specific city, county, town, or community, and links to other useful websites:

American FactFinder is a tool for searching for Census data collected since 1990. FactFinder is the best source for current Census information. Coverage includes:

FactFinder enables you to:

FactFinder is a powerful tool, but it can be challenging to use.

Here are some tTips for using American FactFinder

Example, to find data about grandparents in Indiana:

The Search Page displays showing the best matches for the search terms you entered.

Notice that the search terms you entered are listed in the Your Selections section of the Left Navigation Bar.

The names of tables and other products (documents, prepackaged data files, etc.) matching the items in Your Selections are displayed in the Results section of the Search Page. 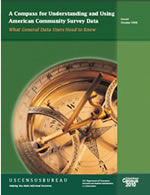 "While the main function of the decennial census is to provide counts of people for the purpose of congressional apportionment and legislative redistricting, the

primary purpose of the ACS is to measure the changing social and economic characteristics of the U.S. population. As a result, the ACS does not provide official

counts of the population in between censuses. Instead, the Census Bureau’s Population Estimates Program will continue to be the official source for

You can use the American Community Survey (ACS) in different ways and for different reasons. The US Government provides these PDF Compass handbookson a particular group with specific how-to instructions and/or case studies.For an introduction to ACS data, we recommend the compass handbook for General Data Users.

How to find total population Data from the U.S. Census (4 min)

This video will walk you through how to use American Fact Finder.
http://factfinder2.census.gov/

This is the first of a 5 part series of census tutorials created by George Mason UniversityLibrary.  The subsequent videos in the series deal with using census data to create maps.

•   State and County QuickFacts—Easy access to facts about people, business, and geography, based on U.S. Census data:

•      Epodunk: The Power of Place—Obtain information from the U.S. Census Bureau about a specific city, county, town, or community, and links to other useful websites: