This guide Is a starting point for locating information and for researching literary topics.

These journals are available through the library's subscription databases. When accessing from off campus, you will be prompted to log-in.  After logging in you should be able to move from database to database until you close your browser. 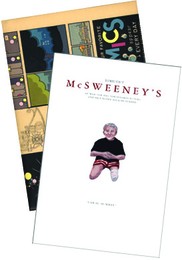 McSweeney’s began in 1998 as a literary journal, edited by Dave Eggers, that published only works rejected by other magazines. But after the first issue, the journal began to publish pieces primarily written with McSweeney’s in mind. Since then, McSweeney’s has attracted works from some of the finest writers in the country, including Denis Johnson, William T. Vollmann, Rick Moody, Joyce Carol Oates, Heidi Julavits, Jonathan Lethem, Michael Chabon, Ben Marcus, Susan Straight, Roddy Doyle, T.C. Boyle, Steven Millhauser, Gabe Hudson, Robert Coover, Ann Beattie, and many others.

Today, McSweeney’s has grown to be one of the country’s best-read and widely-circulated literary journals...committed to finding new voices.