This research guide is to help you find resources to prepare for your trip to Window Rock. Most of the resources may be accessed either here or while you're on the reservation. 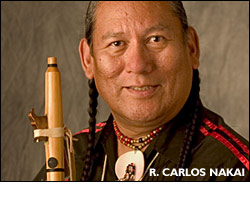 Of Navajo-Ute heritage, R. Carlos Nakai is the world’s best known performer of Native American flute music.  He began his musical studies on the trumpet, but a car accident ruined his embouchure.  He was given a traditional cedar flute as a gift and challenged to master it, which led to his current path. Nakai views his cultural heritage not only as a source and inspiration, but also as a dynamic continuum of natural change and adaptation, subject to the artist’s expressive needs.  Nakai’s first album, Changes, was released in 1983, and since then he has released over thirty-five albums.  He gives educational workshops and residencies, and has appeared as a soloist throughout the United States, Europe, and Japan.  He has worked with Grammy-winning flutist Paul Horn, guitarist William Eaton, and composer James DeMars, among many others. The famed American choreographer Martha Graham used Nakai's second album, Cycles, in her work Night Chant.  Nakai also contributed music to the major motion pictures New World and Geronimo.(from Library of Congress Folklife Series)

This is a  Library of Congress 57 minute web cast of R. Carlos Nakai. (Music starts 5 minutes into web cast.)

"Sheep is your background

Navajo Times   The newspaper of the Navajo People.